Esrom as a cheese type was invented by the Cistercian monks at the Esrom monastery in Denmark in the twelfth to thirteenth century.

The monks spent a lot of time developing cheeses. Following the Reformation the monastery was torn down in 1559 and the cheese type was thought to have disappeared. It was not until 1937 that the cheese was rediscovered at the state research dairy in Hillerød by H.J. Jørgensen. The cheese was first produced at Midtsjællands Herregårdsmejeri, and in 1952 the Esrom name was officially recognised.

Esrom is one of only two Danish cheeses that carry the EU's PGI label. Esrom is exported in large volumes which makes the label especially significant. Unique to Esrom is its smear coating. With this method - termed "the Danish way" - the cheese is produced for rapid smear ripening, i.e. surface ripening combined with ripening from within.

Required characteristics for an Esrom Cheese: 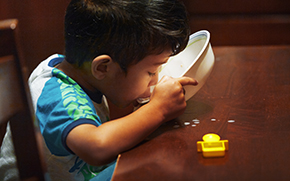 Cheese is rich in protein, calcium and vitamin B12, and many of them does not contain lactose. Read more under healthy living...